“It is certain, in any case, that ignorance, allied with power, is the most ferocious enemy justice can have.”
– James Baldwin

Ignorance and power have proven to be fierce opponents to justice and equality since our nation’s inception. They have sidelined the founding ideals of our country throughout history, unjustly disenfranchising, imprisoning, impoverishing, and killing people for hundreds of years – precluded from the pursuit of life, liberty, and happiness – simply due to their race, gender, sexual orientation, background or creed.

From the beginning, systems of White Supremacy unleveled the playing field, and while some progress
towards equality has certainly been made over the years, there are few places this inequity is felt more than within the walls of schools…

1956. Mansfield, Texas. The Texas Rangers join 300 white protestors to prevent 3 black students from integrating into their high school. The students were transferred to Fort Worth to satisfy the protestors.

2003. Harvard’s Civil Rights Project releases a report which finds that American schools are sliding into “resegregation.” According to the report, in 2000, schools were more segregated than they were in 1970.

2018. The Gay, Lesbian & Straight Education Network’s National School Climate Survey reported that 87.3% of LGBTQ students experienced harassment or assault at school. That same year, 9-year-old Jamel Myles took his own life after experiencing such bullying. Sexual orientation, gender, race, ethnicity, disability, and religion continue to be the most reported reasons for bullying within schools.

Today. 2020. Nationally, 95 percent of at-risk middle school students – primarily from low-income, communities of color – aspire to go to college. Yet, only 8 percent attain a bachelor’s degree.

The reality is that systems of inequity continue to plague our nation and schools – from the lack of resources and advising support to access to technology to a gap in college knowledge – limiting the potential of students who identify as black, indigenous or as people of color. Because of these systems, a student’s race remains one of the most predictive measures of postsecondary success, and countless students’ aspirations are never fully realized.

In fact, this pressing need for equity within the classroom was the catalyst for creating Education Opens Doors. Our organization was founded on the belief that all students deserve the opportunity to pursue their limitless potential, regardless of their race, gender-identity, ability, background, or creed – and we have fiercely pursued that mission since 2012.

However, if we fail to explicitly address and fundamentally disrupt the institutionalized racism present in our society, then we, as Education Opens Doors, cannot accurately claim to support “all students.” It is not enough to simply be non-racist. We must be actively anti-racist in order to begin to unravel the inequity woven into the fabric of our society. Our students deserve no less.

Education Opens Doors is staunch in our commitment to equality. We realize that there is no “finish line” to this undertaking – that there is no accumulation of training, certifications, and consultants that will ever mean our work is done. However, we unwaveringly commit to the practice, the journey, the learning and unlearning.

We also recognize that this journey is not one that can be undertaken in a silo. We need collaboration.
Community. Mutual accountability. To this end, we invite our peers, funders, and stakeholders to join us on this path and hold each other to the ideals of transformational change in which we have grounded our work.

Far too many have been denied equity and justice for far too long. It’s past time to open the doors. 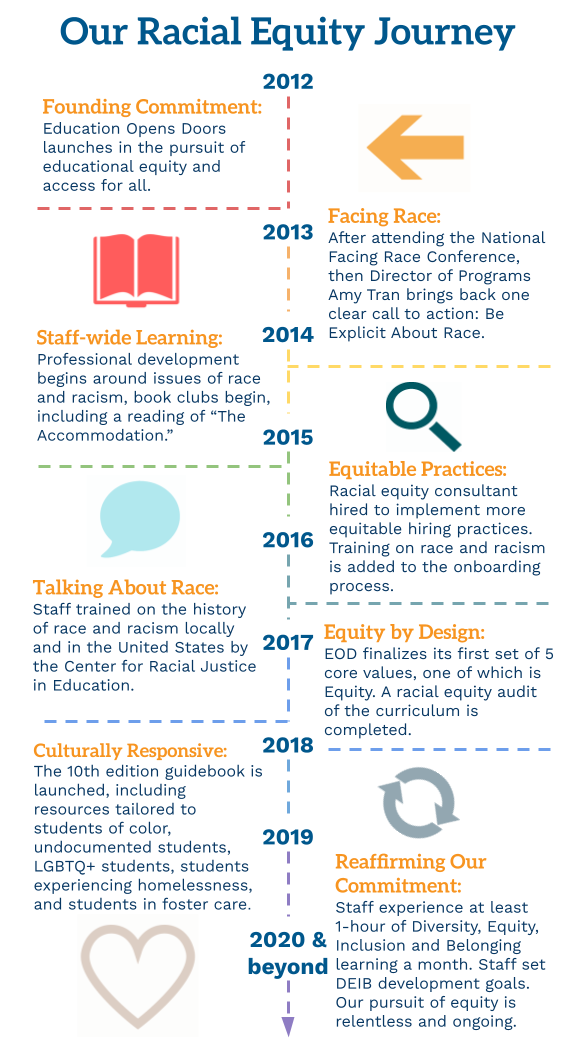